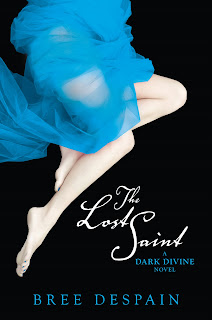 After offering herself as a sacrifice in order to rid her boyfriend of his werewolf curse, high school senior Grace Divine has absorbed some of his lycanthropic abilities. As she trains with Daniel in an attempt to achieve mastery over her powers, she meets another young man who urges her to embrace the anger that triggers her strength and encourages her to join him in the fight against evil demons and vampires. Push back from Daniel, her family, and a visiting pastor lead her to question the benevolence of her new friend; however, Grace's passion to save her brother-whom she fears has been absorbed into a cohort of evil supernatural creatures-leads her to defy those closest to her.

I love the way Bree Despain can write a book with action, werewolves, demons and a kiss here and there and try to keep it wholesome. lol. This book is better then the 1st, the story has developed a lot as well as the characters. I liked the changes in Grace I mean I know she is a pastors daughter but she just felt too squeaky clean...
Daniel I find yummy I really do and I think its awesome that the big bad villain is his father!! Although the miscommunication between Grace and Daniel was sometimes frustrating (I guess that's teens for you)
I liked the mystery that still managed to surround him.

Talbot even though you could guess why he was in the story he was a nice addition, (although who wears a silver star belt buckle) I think Grace was very naive when it came to Tal (as Daniel says she always liked the bad boys) BUT I did like the bad boy turned good for the love of a woman angle.

Jude omg what a waste of space seriously how weak is he.. I would not have risked my life for him. Sometimes I got uncomfortable with how he would talk to Grace (you betrayed me for Daniel) um hello! your her brother not her boyfriend.

The mom I find more then annoying! I wanted to slap her so many times in the book, she went from manic to neurotic not to mention she doesn't have a clue whats really going on with her kids. AND she leaves the baby to be cared for by the teenage daughter... I was not impressed
The action/ fight showdown was awesome I really enjoyed it.. and the touching moment between Grace and Daniel in the cell... AND the ending has me wanting to read the 3rd book for sure!