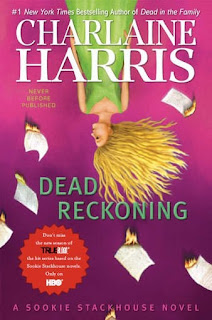 Sookie finds herself in trouble again when shes in the middle of a fire bombing at Merlottes where she works.
After Sam and his two natured friends "came out" people are assuming it could be a hate crime. But Sookie is unsure after all she's collecting a hate list of enemies herself & after finding out the sister of Debbie Pelt is still out for revenge she wonders if its not her life that's in danger.
Things are not going as smoothly as she would like with her vampire lover Eric either. With the vampire secret dealings and the issues with Victor she's seriously looking at her relationship with new eyes.
Shes learning new things about herself, her past and her Grandmother.
When left with a valuable Fae object that has great power she wonders if her fairy kin are just spending time with her because they want it or because they actually care about her.

As much as I love this series and I do! I was left feeling  blah about this book. I didn't feel it was as good as the previous books and that maybe Charlaine Harris is spreading it a little too thinly.
It just about made par for me honestly.
I felt like it was just plodding along and I found myself putting the book down and going back later which certainly never happened before. I mean we waited a whole year for this book!
Don't get me wrong there were things I liked about the story
Bubba came back! I love Bubba he was always such a great character.
I liked finding out about Sookies grandma's past.
I loved that we finally saw Pam could have an emotion connection toward a human.

But on the whole I felt like Sookie had lost some of her character as did Eric and that's what I loved about them in the first place. They where hot and feisty they made me laugh. Where was that?

The story did pick up when the gang hatched a plan to kill Victor which was good reading but could of played a bigger part in the book, It come a little late sadly.

I am basically on the fence about this one.

Molli @ Once Upon a Prologue said...

I've heard from a few others that this book was disappointing. I am wondering if Charlaine Harris is getting bored, and maybe that's why she is ending the series soon. :/

i dont know yes it is coming to an end.. but maybe its because her mom died not long ago it affected her writing

I've never read a single book of this series...yet.

o my goodness you must if you love the show you will love the books they are yummy... well not so much bk 11 but the rest are! lol

I didn't like the last two in this series very much. She's trying to wrap it up, though.. but still! I hope the last few are better!!

I don't follow True Blood much and it's honestly because I can't like a vampire named BILL. Kind of a shallow reason, I know. Lol.

This one was so blah for me too. I really think Harris is setting it up for Sookie to turn her back on the supernatural, so to speak. The scenes between Eric and Sookie were horrible at best, so flat and I am sure they will break-up for good in the next book.

I was very sad that these books have been getting a little boring for me. I loved them so much at first.