So you guys know I have recently read White Cat & Red Glove and have been raving about it! It has been the first set of books that have truly got me excited to be reading this year. When I heard Courtesy of Mundie Moms Blog we had the opportunity to speak with Holly Black author of the Curse Workers series in a chat session last night you know I had to be part of it!
It turned out to be a fun and interesting hour and I am excited to say some of my personal questions where answered. 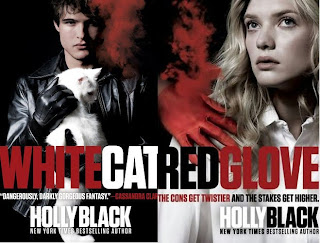 Were did the idea of Curse Workers come from?

Holly Black: A couple of years ago I read a book about a kid who was raised by a grifting mother.
She stole cars, burned down houses for the insurance money, and eventually wound up in prison for murder. But reading about him and how he had to figure out what right and wrong was when she thought wrong was basically getting caught fascinated me and that's where a lot of Cassel came from.

What type of Worker would you like to be?

How do you come up with names for Characters?

Holly Black: I actually feel like I can't start a book until I know the characters' names. To me, when I know the right name, that's when they come alive in some essential way. With Cassel, I heard his name - one of Cassie Clare's friends who I had never met was named Cassel and I knew I wanted to use the name. Then when I met the actual person, it was WEIRD.

Some of my personal questions that got answered:

Me: A lot of Books are being turned into movies if the right offer came for Curse workers would you let it happen?

Holly: right now Curse Workers is in the hands of producers Mark Morgan and Roy Lee -- they are trying to turn it into a TV series. I have my fingers crossed.

Me: Even though Cassel's Grandpa is a death worker I find it hard to hate him, was that your intention?

Me: Do you know how Curse Workers will end?

Holly: Melissa, I know how BLACK HEART ends and it's a nice stopping place, but there are more things that could still happen to those characters.

Now I might just be wishful thinking but I got the impression that maybe there could be a chance for more Curse Worker books, rather then just the 3 intended! (fingers crossed!) from the other questions that where answered To view the Hour long chat please visit Mundie moms HERE And see what you think.

finally thank you to Holly Black & Mundie Moms for coming together :)