This weeks IMM by http://www.thestorysiren.com/ is late I am so sorry! Hectic weekend with my sons birthday... up side being he had a lot of fun at his 'Ben 10' birthday.

Anyways so this week in my mail box I got: 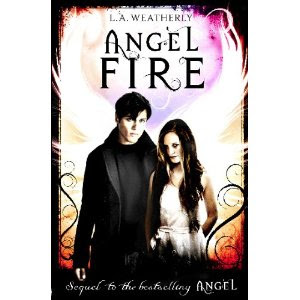 Ok so this is not the cover, but this is the one which has been on the internet. I got this for review from Candle Wick Press. Angel Fire is the Second book in the Angel series by L.A Weatherly, and if you love Patch (Hush series) you will love our Angel fighter Alex.

This is the thrilling second chapter in the electrifying "Angel Trilogy". Angels will never be seen in the same way again. Gorgeous, charismatic Alex has the courage and skill of a trained Angel Killer. Unique, dazzling Willow has the beauty and power that comes with being half-angel. As the power of the malevolent Church of Angels grows, now it's up to Alex and Willow to train a new team of Angel Killers. Willow soon finds her half-angel identity met with hostility by some of the other AKs, while privately, she must wrestle with the knowledge that her father, Raziel, is a depraved, evil angel. However, while life in the AK training camp is tough, at least Alex and Willow are together. But when Alex discovers that the death of his brother and fellow Angel-Killer, Jake, was linked to a secret CIA mission to defeat the angels, he is forced to leave the camp to complete his brother's work... without Willow. Alex promised Willow he would never leave her, but with the fate of the human race at stake, destiny has ruled that Alex and Willow must be parted once more

I got gifted Silence by Becca Fitzpatick from my mom because I have a lovely mummy who is awesome!!! I did a happy dance when I got this in my mail box.. AND I just found out this is not the end for Patch and Nora there will be a 4th book.

The noise between Patch and Nora is gone. They've overcome the secrets riddled in Patch's dark past...bridged two irreconcilable worlds...faced heart-wrenching tests of betrayal, loyalty and trust...and all for a love that will transcend the boundary between heaven and earth. Armed with nothing but their absolute faith in one another, Patch and Nora enter a desperate fight to stop a villain who holds the power to shatter everything they've worked for—and their love—forever

I'm so jealous you got Angel Fire! I just ordered my copy and I will not get it until November, apparently. Boo!

I have never heard of the Angel series. It looks like I will be adding new books to my list. I cannot wait to read Silence and I know I will need something to hold me over until the next book.
- Book Sniffers Anonymous

Angel Fire looks really good! I haven't read this series yet though! Enjoy your books!