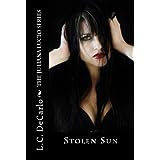 Juliana Lucio is a married doctor of two boys, She works the late shift at the ER were she meets a new doctor the hospital have just employed. Following her gut that something is very wrong about her she decides to investigate the doctor.
Late one night while leaving work Juliana is beaten and left for dead, only to wake up and find herself in bed at a strange house and a Vampire. Her sire Ana the new hospital employee!
Juliana wants to hate Ana but with two evil Reta vampires lurking around and threatening the life of her son she has to team up with Ana and Will (her sexy stud of a house mate) to protect those she loves.

This book is fast paced and gets into the swing of things pretty fast I liked that a lot. Juliana is a kick - ass feisty character who I liked right away - I mean seriously she wants to fight a 400yr old vampire! that's pretty freaking epic in my eyes. I could relate to her a lot, I feel anybody would fight for those they loved and I admired her determination.
I actually cried in parts of this book her anger, loss and sadness really got to me. The author did a wonderful job at conveying that.

William was so dreamy a gentleman Vampire I loved it and could see why Juliana was attracted to him. He was her rock when everything else was falling apart (yes I am a hopeless romantic)

Ana was a complex character even though she is the cause of Jules pain she isn't an evil person. She didn't mean to hurt Jules the way she did and is sorry about it. Ana is a character I am interested in seeing develop more through out the series.

I did enjoy reading this book and getting to know the characters I am very interested in seeing where the author takes them and how they grow and change. I liked the concept and the well thought out personalities. The plot was strong enough to carry on the series -  I look forward to book number 2.

Now I want to read this book badly!

Thank You Melissa for the wonderful review. I know you have a life outside of your blogging, and it makes me appreacite it that much more. If you want to follow what going on with book two it you can like my FB or follow my Website. Thank you again for all you do.
~~ L.C.

no problem! I can not wait to visit Jules and Will again. I will also put this review on amazon.

p.s I think Joy already has the book she just has a little book buying addiction so she sometimes forgets which ones she has LOL