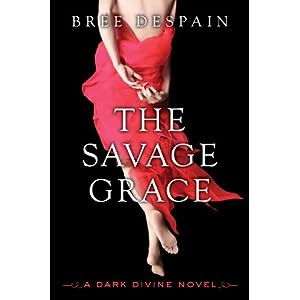 A troubled soul. An impossible choice. A final battle.

Wrestling with the werewolf curse pulsing deep inside of her, Grace Divine was finally able to find her brother, but it nearly cost her everything.

With her boyfriend, Daniel, stuck in wolf form and Sirhan's death approaching, time is running out for Grace to stop Caleb Kalbi and his gang of demons. If she fails, her family and hometown will perish. Everything rests on Grace's shoulders.

The final installment in The Dark Divine trilogy brings Daniel and Grace's love story to a breathtaking conclusion.

I really like this trio of books the author has a wonderful style of writing with attention to detail. I loved that each character felt 'needed' and had a personality of there own.  She dealt with issues that sometimes can be difficult to write about, such as the faith of a person which was done in a beautifully balanced manner.
Savage Grace was a turning point for Grace she finally became a Woman so many times in the past I've found her way of thinking and actions child like. In the Savage Grace she really became a stronger person, a leader, a protector... and I was happy her family finally recognised her for what she had become.

While the Teenage love element in this story was strong, I found it wonderful that Daniel and Grace had a head on there shoulders... the author didn't feel the need to throw sex into the mix in order to vamp up the story. I found it very respectable!!! As a reader I felt it wasn't needed, you where able to tell the love Grace and Daniel had for one another with out it.

I was hoping for more when it came to Jude what happened to him saddened me after so much action concerning him I wanted something better.
I loved the new characters, Ryan, Slade and Brent especially with there Peter Pan mentalities they were a pleasure to get to know.

I have mixed feeling when it comes to Talbot... he was the wild card and we always knew he wasn't trust worthy...but what now? I am still left with so many unanswered questions.
While I enjoyed the read and loved meeting new characters as well as old, not to mention the action packed fight scenes! There was definitely a lot more going on in this book action wise.

I just felt a little empty at the end... How can there be a happy ever after in the end with Talbot still out there?

I totally get that empty feeling at the end. I get that with the ending of a lot of series and I'm sad the questions about Talbot because I was so looking forward to getting them answered! I'll still read it but I'm gunna put it off I think... great review chick!! :)

its still am awesome read.. i think you'll love slade and the new guys there so fun.

Maybe a novella for Tabolt? that would be hot!

Oh wow! How did I miss this book? I miss Daniel and Grace. Looking forward to reading this. Thanks for sharing, Mel! Have a lovely week :)