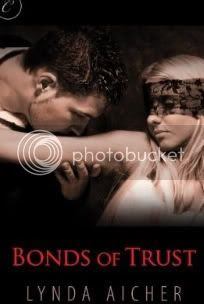 Bonds of trust - Lynda Aicher
Carina press
This ebook is on Amazon right now for $2!! Go go buy it now it will be money well spent!!

Cali is at a cross roads in her life she's just ended her 20 plus year marriage to a man who she was sexually incompatible with. With grown kids is it even possible she can go after what she wants, her deepest fantasies?l

Jake is the owner of the most exclusive Dom/Sub club on the scene right now. Only people who are screened and interviewed can be members. After 5 years at The Den he's ready to move on, never staying in one place to long nobody has even made him want to stay until Cali graces his office... With the body of a woman half her age and all that vulnerability in her eyes he can't help but be intrigued by her.

I loved this story and I got so much more out of it then I thought I ever would. This isn't just about a midlife crisis or sex. This is about a woman finally having the courage to go after what she wants. I was totally impressed with the authors writing when it came to her characters. Cali is at the age where it could be considered that she's a cougar but it wasn't portrayed that way. She was sexy but vulnerable, classy and devoted but able to dream I liked her a lot.

Jake seen in Cali something that he hadn't seen in anybody else. Even though he was the Dom they both held power in the relationship. I learnt a lot.. sometimes the sub is seen as weak, in this relationship it wasn't the case. They both needed something in the roles they played. Jake needed Cali as much as she needed him..Running from his past and fears of his own it was Cali that made him finally stop and think of a future.

There chemistry was dynamite and sensual and at times tender and romantic, I loved seeing both sides of the coin and really enjoyed this read it was a fast page turner and I can't wait for book 2 in the series.
Posted by Unknown at 7:54 PM