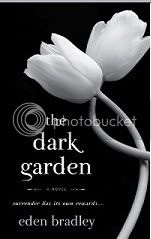 About the book: (description from the book)

If you loved Fifty Shades of Grey . . . get ready to enter The Dark Garden.

A deliciously potent tale of one woman’s quest for self-discovery.

Rowan Cassidy likes to be in charge—especially in her personal life. As a mistress at Club Privé, the most exclusive bondage/S & M club on the West Coast, Rowan can live out her dominant fantasies safely, and with complete control—until the night Christian Thorne walks in. Self-confident and sophisticated, he’s a natural dominant if Rowan’s ever seen one. Yet she can’t stop thinking about him and imagining his touch.

Christian has returned home, hoping to break free from his dissatisfaction and malaise—and discovers the cure in Rowan. He’s dying to get his skilled hands on her and watch her surrender, to unlock the mystery of her that captivates him. Determined to be her master, he makes Rowan a daring proposition: give herself over to him for thirty days.

Rowan finds Christian’s offer terrifying—and impossible to resist. But abandoning herself to Christian’s power might be more than she can handle. . Or it might be the realization of her true nature and the dark garden within her. There will be only one way to find out. And once the game has begun, there’s no turning back.

When books are compared to each other I tend to be wary. Being compared to 50 Shades of Grey is a big statement since those books are very popular indeed.

I was pleasantly surprised by The Dark Garden! It was an enjoyable read that I read in one sitting, it was a page turner for me!

Rowan seems on the surface an independent woman who knows what she wants and how to get it. She's a Dom at the S&M club she goes to and everybody knows her.

Until she meets Christen he's Intrigued by Rowan right away and wants to get to know her. He knows what he's been told about her that she's a Dom, but he can't help but feel she has a submissive nature and wants to help her find her true self.

I loved the relationship between these characters the need they have for one another is so strong but they can't explain the whys of it. They both have issues and past experiences that they need to work through and they look to each other to help them over come them.

I truly loved April (Rowan's friend) she was my favorite! A natural submissive but a genuine heart and a strong person who goes for what she wants and puts all of herself on the line.
(what she wants is the clubs biggest Dom and playboy Decker) She is such a powerful character.

The author did a wonderful job explaining to the reader that a submissive nature doesn't always equal weak, And that when it comes to the S&M lifestyle and interactions it's not just all about sex but at times a deeper psychology.

I felt like I learnt something after reading this story and truly enjoyed the story and characters.
Posted by Unknown at 8:08 PM