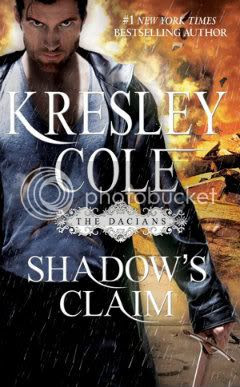 About (from the book)

#1 New York Times bestseller Kresley Cole introduces The Dacians: Realm of Blood and Mist, a new paranormal series following the royal bloodline of Dacia, a vampire kingdom hidden within the Lore of the Immortals After Dark.
Shadow’s Claim features Prince Trehan, a ruthless master assassin who will do anything to possess Bettina, his beautiful sorceress mate, even compete for her hand in a blood-sport tournament— to the death.

HE WON’T BE DENIED

Trehan Daciano, known as the Prince of Shadows, has spent his life serving his people—striking in the night, quietly executing any threat to their realm. The coldly disciplined swordsman has never desired anything for himself—until he beholds Bettina, the sheltered ward of two of the Lore’s most fearsome villains.

SHE’S BOUND TO ANOTHER

Desperate to earn her guardians’ approval after a life-shattering mistake, young Bettina has no choice but to marry whichever suitor prevails—even though she’s lost her heart to another. Yet one lethal competitor, a mysterious cloaked swordsman, invades her dreams, tempting her with forbidden pleasure.

A BATTLE FOR HER BODY AND SOUL

Even if Trehan can survive the punishing contests to claim her as his wife, the true battle for Bettina’s heart is yet to come. And unleashing a millennium’s worth of savage need will either frighten his Bride away—or stoke Bettina’s own desires to a fever pitch. .

This is one of my most favorite series. I've been invested in the world Kresley Cole has created for some time. Action packed and vivid you can't help but love these characters and Shadows Claim did not disappoint.

Trehan is an older Vampire who has lived for his kingdom for as long as he can remember. He's on a mission to find a tracker who broke a law, that last thing he expects to find is a 20 something sorceress who makes his heart beat again!

Bettina although may appear weak and dependent on others is actually far from it. She's loyal even when it lands her in trouble and fights for what she wants. She is the complete opposite to Trehan but compliments him well. She is able to teach this much older Vampire things and view the world differently, she gives him meaning.

I enjoyed the plot and getting to learn about new characters in he Lore as well as catch up with some old friends - Lothaire, Elizabeth, Sabine and many more. This is just one series that has huge potential and keeps getting better and better!

Kudos Ms Cole A+ as ever I really can't fault.... Sabine's sister needs her own story ASAP!! After being kidnapped by her life enemy I hope her book is coming next.. I simply can't wait!
Posted by Unknown at 8:12 PM