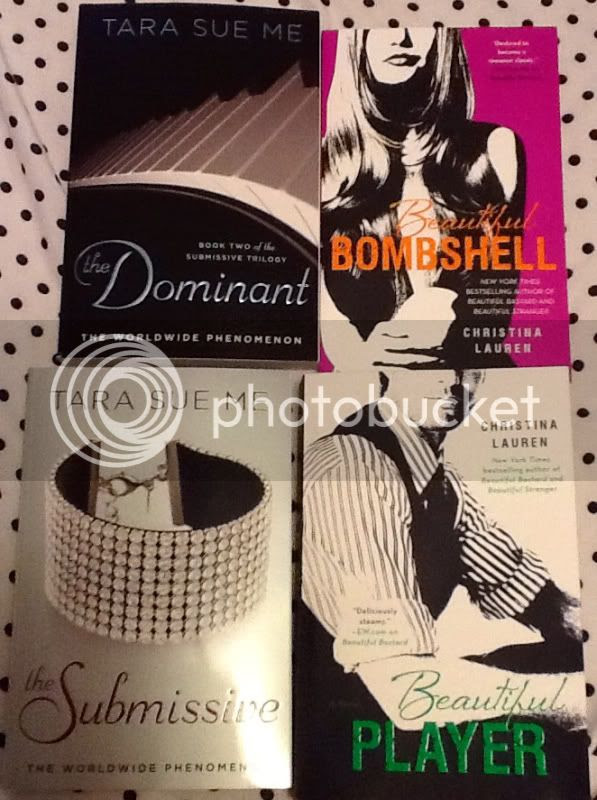 When Max, Henry, and Will steal Bennett away for a weekend of shenanigans and strippers in Vegas, the first stop of the night doesn’t go at all as planned. With their scheme for a Guys Weekend completely derailed anyway, Max and Bennett begin to play a wild game of stealth and secrecy in order to have their bombshells all over Sin City.

Beautiful Player - A bombshell bookworm. A chronic Casanova. And a lesson in chemistry too scandalous for school. When Hanna Bergstrom receives a lecture from her overprotective brother about neglecting her social life and burying herself in grad school, she's determined to tackle his implied assignment: get out, make friends, start dating. And who better to turn her into the sultry siren every man wants than her brother's gorgeous best friend, Will Sumner, venture capitalist and unapologetic playboy? Will takes risks for a living, but he's skeptical about this challenge of Hanna's¿until the wild night his innocently seductive pupil tempts him into bed - and teaches him a thing or two about being with a woman he can't forget. Now that Hanna's discovered the power of her own sex appeal, it's up to Will to prove he's the only man she'll ever need.


The Submissive - about from Amazon:
Book Description Publication
Date: February 7, 2013
Book One of the Submissive Trilogy More than 8 Million Reads Online The first in Tara Sue Me’s seductive and scandalous series that has enthralled millions…

Abby King has a secret fantasy. New York knows Nathaniel West as the brilliant and handsome CEO of West Industries, but Abby knows he’s more: a sexy and skilled dominant who is looking for a new submissive. Yearning to experience a world of pleasure beyond her simple life as a librarian, Abby offers herself to Nathaniel, to fulfill her most hidden desires. After only one weekend with the Master, Abby knows she needs more, and fully submits to Nathaniel’s terms. But despite the pleasure he takes in Abby’s willing spirit, the Nathaniel hidden behind the rules remains cold and distant. As Abby falls deeper into his tantalizing world of power and passion, she fears that Nathaniel’s heart may be beyond her reach—and that her own might be beyond saving…

Now comes The Dominant, the continuation of the tantalizing trilogy by Tara Sue Me, which has captivated millions and made its way onto the New York Times bestseller list…

Nathaniel West doesn’t lose control. As the playboy CEO of West Industries, he governs the boardroom during the day; as a strict dominant with exacting rules, he commands the bedroom at night. He never takes on inexperienced submissives, but when Abigail King’s application comes across his desk, he breaks his own restrictions and decides to test her limits. Abby’s combination of innocence and willingness is intoxicating, and Nathaniel is soon determined to collar her as his own. As long as she follows his orders and surrenders herself fully to him, no one will get hurt. But when Nathaniel begins falling for Abby on a deeper level, he realizes that the trust must go both ways—and he has secrets which could bring the foundations of their entire relationship crashing down...
Posted by Unknown at 2:14 PM No comments:

The Arrangement: The Ferro Family by H.M. Ward
My rating: 5 of 5 stars

H.M Ward -The Arrangement: this book is as far a 12 part serial story. I fell upon the Ferro family after reading Damaged which deals with another brother.

The Arrangement is about Sean Ferro a jaded business man who's dealt with a lot of heartache and darkness and now carries those ghosts with him.
That is until he meets Avery one night who is chasing after her car which was just car jacked and he stops to offers help.
He can't help but be drawn to her charismatic personality it brings light to his soul.

Little does he know that Avery is dealing with her own grief which Is eating her alive slowly, and there paths will soon cross with her new job as a call girl.

This is a couple that is dealing with heart breaking dark issues, who are trying to take solace in each other. The relationship they have is not conventional but you can't help but want a happy ending for them. When they are together it's mind blowing good!

"People that are only there during the good times suck. I’ve had enough leeches in my life, and I’m grateful for the friends I have now. It hasn’t escaped my notice that the people that I like the most are the kind that have been beaten by this life and didn’t lie down, face first, in the dust. We gravitate toward one another. Maybe no one has an ordinary life, but since that’s what I’m striving for, I’d rather not think about it. Chasing something that doesn’t exist would completely suck." - Avery

"Fear is like love. It has the same depths, the same intensity.” He’s watching me, running his finger along my cheek. He’s concerned that he pushed me too far too fast. Sean continues, “So does pain. You use pain the way I use fear—to forget.” -Sean


I was wary of these books so many people complained about the price of each installment $2.99 for a 100 or so pages which does seem expensive but once you start you can't stop, this became an addiction for me.

H.M Ward is amazingly talented and I don't feel that way often. The characters are so developed and complex you feel like you know them.
You deal with double crossing, manipulation, death and other troubling issues but at the same time will laugh so much it brings tears. Her story telling literally holds its all I'm in awe of her writing skill.

Posted by Unknown at 4:05 PM No comments:

This Man by Jodi Ellen Malpas
My rating: 4 of 5 stars

Thanks to netgalley for letting me review this title!

Ava is interior designer who's very up and coming, young ambitious and very driven. So when she's called upon to design at a rich manor she finds it hard to say no...when she finally meets Jesse sparks fly and the sexual reaction to him is uncontrollable. There are a million reasons why this shouldn't happen but when she's around him she loses all rational thought.

Jesse is a millionaire hot shot with serious control issues and many secrets. He's a man who's never been in a relationship and never slept with the same woman twice until Ava walks into his office and he knew he had to do anything to keep her.

This is intense reading and very fast I devoured every word. I mean Jesse makes Christen Grey seem normal, he's an utter train wreck but you can't help but feel compelled to get to know him...I wanted to know his story as much as Ava!

The sex is amazingly hot and powerful and I was totally in love with Sam and Kate I hope to see more of the blossoming romance between the two friends.

I even liked evil bitch Sarah every story needs a good villain! This isn't a hearts and flowers romance it's dark, dirty and gritty.. you don't have to understand the connection but it's addictive and makes for great reading

Beneath This Man by Jodi Ellen Malpas
My rating: 5 of 5 stars

Beneath this man is book 2 in the This man trilogy and picks up where book 1 left off.

Ava has become to need her lord even though he's a neurotic control freak. In the short time she's known him her life has been turned upside down. The manor, the women and now the drinking..what does she really know about this man who's captured her heart, and will he ever trust her enough to truly let her in?

Jesse is in over his head he's never felt this way about a woman..ever! And there has been plenty of them it's making him crazy literally. He's a man with history, with baggage and a dark past that grips his soul. He's terrified Ava will find out his secrets and run.

Their relationship is defiantly not what I consider normal and crazy frustrating at times..the author has you screaming at the pages. But it is definitely a page turner I promise you that

The sexual Chemistry between these two characters Is truly amazing and then there is the drama of getting past all these woman who Want claim to Jesse and all the jilted men who want revenge.

Jesse is a character you want to get to know, you Want to know his secrets and how he thinks, this is what keeps you reading..

Ava has claws when needed and I loved that by far my favorite part of the book was the Ava - Sarah show down I honestly lost my breathe!!

A nice little element was a scene at the end of the book retold from Jesse's P.O.V

Posted by Unknown at 6:54 PM No comments: